First, let me state the obvious: Morocco is a beautiful country to visit, a photographer’s orgasm, a feast for your senses; a flurry of scents, oils, spices and clay. It has, admiringly, fared very well in becoming one of the top tourist destinations in the world, partially due to its cheap flights from Europe (RyanAir often offers fares as low as £40 for a return ticket in low season) but also due to its combination of exotic charm and comfort.

But you knew that already, didn’t you? Having traveled to Casablanca, Rabat, Fez and Marrakesh, I’ve found that I’ve both loved and hated my time there – actually, let’s rephrase that: I’ve loved everything about my trips to Morocco except for the harassment, which annoyed even me, weary Cairene that I am.

But I digress. The point of this post is to tell you that, if you ever have a choice between which city to visit – Fez or Marrakech – please take this into consideration.

Again, stating the obvious, but don’t visit Marrakech during the summer, no matter how tough you think you are, because you’ll end up pouring bottled water down your back in broad daylight in front of a bemused crowd as you pant like an overheating car, and manage to burn your skin despite precaution, good genes, and SPF. Seriously.

While the heat was unpleasant in this desert-climate city, my travelling companion and I found great solace in our beautiful hotel, Riad Charai, literally an oasis that we gladly came back to after long days of getting lost in Marrakech’s winding streets. 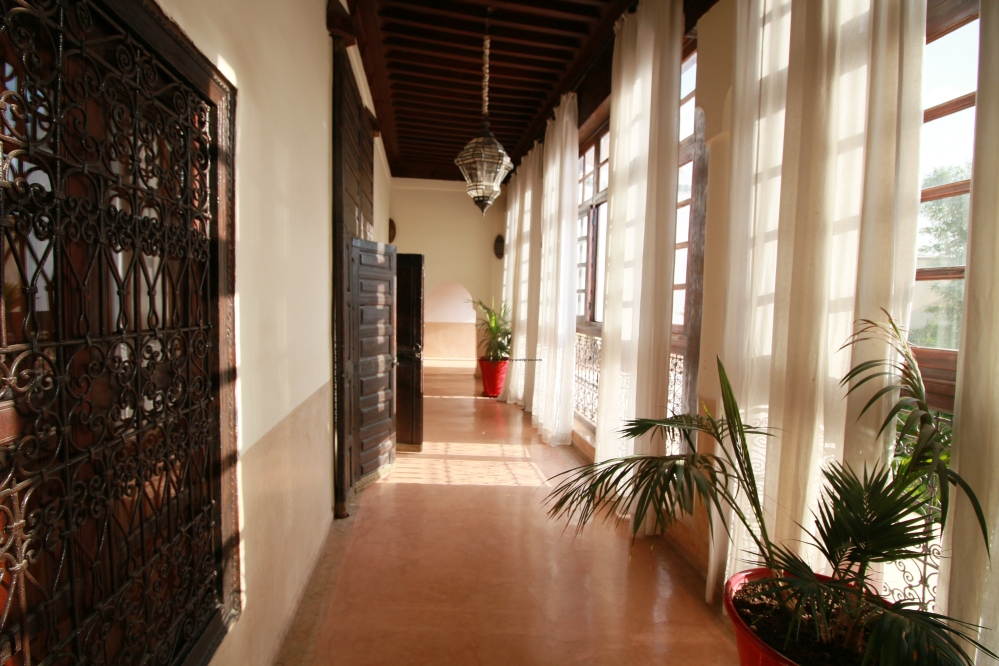 For £30 a night pp, we had a massive suite with an en-suite bathroom, incredibly courteous service, impeccable cleanliness and – HURRAH – a small but very cooling pool that we ended up swimming in even at 11PM as it was so. damn. hot.

During the day, we visited the town’s typical sites, including the Badii Palace – totally worth it just for the massive courtyard pool – the beautiful Bahia Palace, and the Ben Youssef Madrasa, which is best visited in the afternoon if you want to photograph it – make sure you visit its student rooms with their beautiful wooden Arabesque windows.

For me, the two biggest disappointments were the Jardin Majorelle – the much touted Saint Laurent villa just outside the old medina, which is really just a villa and nothing else (I was frankly expecting some stunning architecture or interior and got nothing more than a pleasant walk around a nice garden), and Jemaa El Fna, the main square in Marrakech where I got verbally assaulted by a random woman, and people were constantly touching and harassing us to buy things, which only made us rush through the area even faster.

You’re better off having some delicious mint tea off one of the many rooftop cafes overlooking the square, and if you’re feeling adventurous, the street food was absolutely delicious – we followed Time Out’s recommendation for Table Nr. 31 and were very, very happy. The square is full of tables manned by loud waiters who will plead, yell, and sometimes drag you over to their stalls, so we were happy to go straight to 31.

What made our trip tedious – and what has put me off going back for a while – is just how persistent and aggressive the harassment was. We were warned by our hotel staff not to take directions from anyone on the street unless they were shopkeepers or women.

Because the medina is full of winding streets with poorly marked signage, and because our GPS and Google Maps barely worked, we were completely distracted by the constant cries of ‘La Plaza? You’re going the wrong way!’ every two metres of the way. We realised this was some standard plot to get us lost so that we’d ask these men for help and obviously tip them – I checked with friends who’d travelled there too, some several years before, and they had all experienced this.

While we said no in every language we knew, that didn’t put anyone off; and I basically spent three days running away past shops and landmarks that I would have gladly gone into if it weren’t for the constant calls.

Fortunately, we found great spots to take refuge in, including Le Jardin in the heart of the souks, and I Limoni, a Moroccan/Italian restaurant that made the most delicious lamb tagine with figs and nuts, and delectable lemon panacotta (read my full review here).

Ultimately, this harassment ruined our last night as we got royally lost and pissed off, opting for a taxi where we had to borderline physically fend off another man from harassing us as we got in. This made me think that I’d probably hate Marrakech if I were on my own as a woman, especially since my Arabic surprisingly didn’t seem to help me in any way here.

Which brings us to Fez, lovely, lovely Fez. For some unknown reason, Fez has not attracted the same droves of tourists/celebrities/hipsters as Marrakech, which may be a great thing as the city was less crowded, less tourist-oriented and locals were not as persistent in their harassment.

Travelling in February with five other women, we found a dirt cheap £40 flight via Ryan Air from Stansted and were happy to find that Fez was much sunnier and warmer (an average of 18 degrees during the day) than London.

We were lucky enough to stay in a Riad right in the heart of the old medina (aka Fes El Bali, the extremely affordable Dar Chaibi, whose receptionist Fatima became our local guide and went out of her way to help/protect us, as well as buying us incredibly pure Argan oil from her family’s wholesale dealer instead of letting us fall for the cheaper quality bottles in the market.

Despite being tiny and somewhat cramped with five very loud and opinionated women, the dar was well worth our measly £15 pp for three nights: the cooks, Ghitsa and Edrissia, served us the most succulent chicken roasted in lemon curd that we had ever tasted, as well as massive breakfasts of delicious strawberry-mint juice, pancakes and fresh jams.

Sightseeing in Fez include the obvious landmarks: the tanneries – avoid if you have a sensitive sense of smell as the horse urine stench is quite overwhelming – the madrasas and mosques – I feel like we visited so many we had Madrasas coming out of our ears, and the Souk, where my Arabic and haggling definitely worked out better for me than my British friends, though it in no way compared to my fellow Egyptian friend, who reduced one shopkeeper to what looked like tears after a full hour of relentless, ruthless and very brutal Egyptian-style haggling.  Somehow we walked away with all our purchases and most of our money, as well as a few free keychains and the flustered goodbyes of the shop attendants who probably hoped to never see a haggler like her again.

As fun as this all was, I took greater pleasure in walking through the vegetable markets and snooping through shops, watching locals and eavesdropping on conversations away from the tourist shops and crowds.

Aside from its beautiful surroundings and its most delicious fruit, Fez’s greatest asset is its location: the city is close(ish) to other major cities – in fact, if you feel like visiting the blue city Chefchouan, Fez is one of the closest cities to it, just 8 hours (!!!) away by bus.

Because we were a group, our riad was able to book us an affordable minibus (around 600Dh pp) for a four-hour excursion to the Roman city of Volubis, the equally gorgeous Meknes, and the hill town of Moulay Idris, which carries a tomb of Moulay Idris, who founded the city as well as Fez in the 800s.

Our pleasant and shy driver eventually noticed that every time he’d drop us off, we’d end up in a coffee shop and drink fresh juice and forgo any sightseeing, so we were politely dropped off at the Mausoleum of Mouley Ismail, a stunning yet quiet space that we enjoyed walking through and photographing.

Ultimately, experience is subjective, and while I walked away with pleasant memories of my time in Fez, my British friends complained of the harassment they experienced, often sexual and in one case racial, especially when moving around the city without me or my fellow Arab friend as chaperons.

Having said that, I’d still recommend Fez over Marrakech: its location, the quality of its fruit and food, and the fact that it had far less tourist crowds meant that I was able to have a slightly more authentic and hassle-free experience there.

One rude awakening, though, was on our last day, when leaving the medina, we drove through the new city full of franchises, McDonalds’, Carrefour et al, a sight that confused us and left us with a sneaky feeling that being exposed exclusively to the old town and its tourist landmarks for three days didn’t yield that much authenticity to our experience. But oh well. 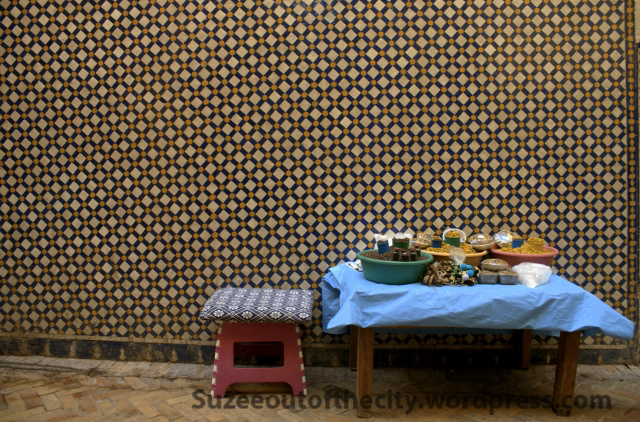